The positions of the solar system planets on the December 21 solstice (2012 December 21 at 11:12 Universal Time - Image credit: Solar System Live).  Do they look aligned to you?
No, the planets of the solar system will not align at the solstice on December 21, 2012.  The diagram below shows the positions of all the solar system planets (and the dwarf planet Pluto) at the instant of the December 2012 solstice (2012 December 21 at 11:12 UTC).
Find out which symbols represent which planets here.  Look for yourself. Do these scattered planets look aligned to you? If you squint, I suppose you could say the planets Jupiter, Earth and Venus appear aligned in space. However, such an “alignment” is not rare. If you could somehow reside above the solar system, and continually watch the planets move in space over years or millenia, you’d find that the planets make all sorts of patterns with respect to each other, endlessly, as they orbit the sun. How could it be otherwise?

Via Morehead Planetarium and Science360

No, Earth will not pass through the galactic plane in 2012, contrary to what you might have heard. Earth won’t be physically passing through the plane of the Milky Way galaxy for another 30 million years. However, Earth will cross the galactic equator in 2012. As seen from the sun, the Earth does this every year – twice.

Here’s some background. When we speak of the galactic plane and the galactic equator, we’re speaking of two different systems: the real and the imaginary

The galactic plane is the actual mid-plane or center line of our galaxy’s huge spinning disk of stars. We are not located on the exact mid-plane of the galaxy. It’s this exact mid-plane people are speaking about when they speak of crossing something.

How far are we from it? You might think that astronomers have this number at their fingertips, but they don’t. We’re at least several dozen light-years from it, maybe more. If you’re interested in how astronomers discuss these things, check out this letter from John Bachall and Safi Bachall printed in the journal Nature in 1985. It suggests our Earth and sun are currently above the plane (to the galactic North) by about 75 to 101 light-years. 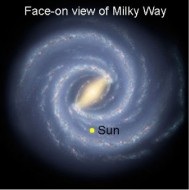 The real: our sun and Earth reside in the Milky Way galaxy. If you could see the Milky Way face-on (which we can’t, of course, because we are inside it), it would look round. But if you viewed it edge-on, it would appear flat. The plane of the Milky Way is the flat part containing most of the galaxy’s stars. Our sun lies slightly off-center in the galactic plane. The real. When someone says galactic plane they are most often referring to the real Milky Way galaxy – home galaxy to our Earth and sun – spinning in space.